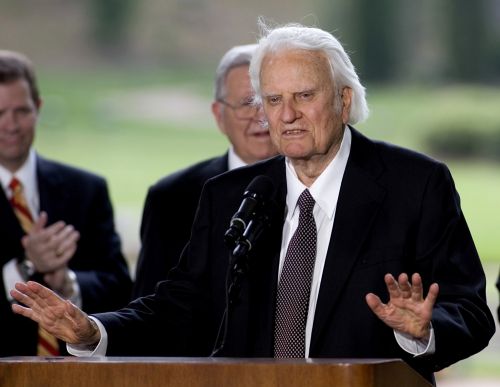 Even though the Bible reveals times when God was angry, people cannot compare their selfish anger to His righteous anger, says the Rev. Billy Graham.
In a question-and-answer column published by the Billy Graham Evangelistic Association on Friday, Graham was asked how anger can be considered wrong if God was often angry in the Bible.
“I admit I get angry fairly easily, but why is anger supposed to be a sin? After all, the Bible says that God sometimes gets angry, doesn’t it? And wasn’t Jesus angry when He drove those money changers out of the Temple?” inquired the person.
Graham responded that there were indeed times in the Bible when God and Jesus would get angry over certain things, but then added, “Jesus’ anger was far different from ours, and so is God’s.”
“We get angry when someone offends us or keeps us from doing something we want to do. We also get angry when we want something for ourselves, but we don’t get it,” wrote Graham.
“In other words, our anger is centered only on ourselves and our desires — and when we don’t get what we want, we get upset.”
Graham contrasted this with Jesus’ anger when he drove the moneychangers out of the temple, as recorded in the Gospel of Matthew, chapter 21.
“He was angry because the merchants were treating God’s House with contempt. He also was angry because they were cheating and treating people unjustly,” continued Graham.
“And when God gets angry at sin, it’s because He knows the terrible damage it does to us, whom He loves. Instead of a selfish anger, His is a righteous anger.”
This is not the first time that Graham has answered a question about the topic of anger. In 2014, a person asked him about which was worse, anger or hatred.
We had a big debate the other day in our Bible study class about which is the more damaging emotion — anger or hatred. We couldn’t decide, but wondered what you’d say,” inquired a person back in July 2014.
Graham replied that both of them are “destructive,” with hate and anger often going “hand-in-hand.” In his 2014 reply, Graham also drew a distinction between human anger and hatred and the times when God expresses anger or hatred.
“Does God ever get angry, or does He ever hate? It may surprise you, but the answer is ‘yes.’ But God’s answer is far different from ours, because it comes from His hatred of sin,” noted Graham.
God loves us and knows the terrible things sin does to us — and that makes Him angry. Perhaps you’ve heard the old saying, ‘God hates the sin, but He loves the sinner.’”

Michael W Smith – The Way of the Father: Lessons from My Dad, Truths about God [Book]

Michael W Smith – The Way of the Father: Lessons from My Dad, Truths about God [Book]

Biblical Interpretation: How Should Christians Approach Studying andTeaching the Bible?