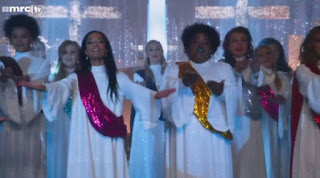 Over 234,000 people have signed onto a Change.org petition urging Netflix to cancel the series because it “perpetuates not only the toxicity of diet culture, but the objectification of women’s bodies.” The petition’s author recently posted an update in which she added: “Turns out fat-shaming wasn’t the only problem with this show,” and argues that the series also makes “jokes about sexuality, race, and molestation.”
The show’s creator Lauren Gussis told the Chicago Tribune in an interview that she drew upon her own experiences being bullied in school and issues with overeating and body image for the series and has been surprised by the backlash.
“The show is so much about wanting things to be different, and then the second they are different, then you want them to be different again. So I think for me, part of my work spiritually is loving what is,” Gussis told the Chicago Tribune. “I choose to love it exactly as the way it is because it’s brought me to this place on this day, which is exactly where I need to be