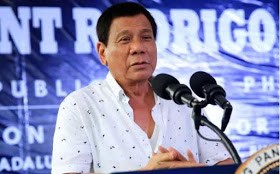 Following his war against drug dealings in the country, Philippines President Rodrigo Duterte has signed an executive order imposing a nationwide smoking ban in public places.
The executive order which was signed by the President on Tuesday was announced by the Executive Secretary Salvador Medialdea on Thursday.
‘There shall be no opening that will allow air to escape from the designated smoking areas to the smoke-free area of the building or conveyance, except for a single door equipped with an automatic door closer.’
‘The designated smoking area shall not be located within 10 metres from entrances, exits or any place where people pass or congregate or in front of air intake ducts.’ the order said.
The order includes playgrounds, sporting areas, sidewalks, schools, workplaces, government offices, restaurants and carries a maximum penalty of four months in jail and a fine of 5,000 pesos ($100) if anyone is caught violating the order.
However, Duterte was a heavy smoker but had to quit when he was diagnosed with Buerger’s disease, which can cause blockages in the blood vessels.
According to Reuters, the ban is one of the region’s strictest anti-tobacco laws which is expected to impact on an estimated 17 million Filipino smokers.
DON’T WANT TO MISS OUR UPDATES???
KINDLY LIKE OUR FANS PAGE FOR EXCLUSIVE UPDATES
KINDLY SHARE THIS
Show More
Share
Facebook Twitter LinkedIn Tumblr Pinterest Reddit VKontakte Odnoklassniki Pocket Share via Email Print

Until The People Of Southern Kaduna Have Their Peace, Nigeria Will NotHave Peace- CAN President Says