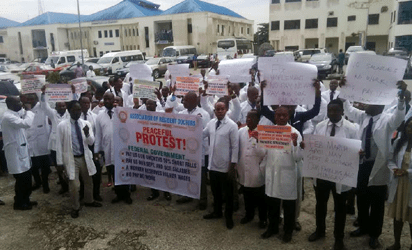 YENAGOA – RESIDENT doctors attached to the Federal Medical Centre, Yenagoa, Bayelsa State last week protested over unpaid four months salaries owed them by the Federal Government, threatening to withdraw medical services to patients on November 15.
The protesting doctors, under the Association of Resident Doctors said though they have met the management of the Federal Medical Centre over the issue, the responses were not encouraging.
The aggrieved resident doctors led by their Chairman, Dr. Nonso Okoye, and armed with placards some of which reads “Our Families are hungry”, FG pay our salaries” and “we are hungry, MMM is becoming an option”‎, called on Nigerians to prevail on the Federal Government to pay up salaries owed them.
The protesting doctors in Bayelsa recently.

According to the protesters, they ‎were paid 52 per cent salary from February to May, 2016 and owed September and October.

“We want the Federal Government to pay us our monies. We have not withdrawn services. All we are saying is for the government to pay us for work done.
“Nigerians should prevail on the Federal Government to pay us. As much as we don’t want to withdraw our services, we have resolved to withdraw the services by 15th of November if nothing is done.
“We have met with the management but all they did was pay us a month salary. They told us that the budget available cannot pay salary,” the protesters said.
‎Contacted, the Chief Medical Director of the Federal Medical Centre (FMC), Dennis Alagoa said the blame is not from the management, but added “with Tuesday statement by the President, we are assured that the issue will be resolved soon.”
On the alleged threat by the resident doctors to down tools, he said the issue of strike will not make a difference as the matter is on the table of the Federal Government
Show More
Share
Facebook Twitter LinkedIn Tumblr Pinterest Reddit VKontakte Odnoklassniki Pocket Share via Email Print