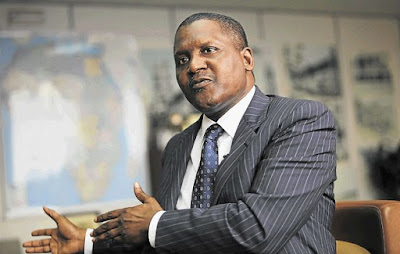 Alhaji Aliko Dangote says a lot of Nigerians are living below the poverty line – He noted that this has led to increase in crime and vice – The richest man in Africa blamed the drop in the country’s revenue for government slow performance Alhaji Aliko Dangote has lamented that more than 100 million Nigerians are poor and that this will lead to increased crime. The Punch reports that Africa’s richest man said at the Executive Course No. 38, 2016 of the National Institute for Policy and Strategic Studies in Kuru, Plateau State.Dangote said that it was ironical that in spite of the abundant resources, Nigeria was still dealing with serious poverty.He said:“It is a curious paradox that Nigeria, Africa’s largest oil producer, and the largest economy on the continent, also has one of the highest levels of poverty. “It is estimated that more than 100 million out of a population of 187 million Nigerians live below the poverty line.”He noted that “youth unemployment had risen to 42 per cent this year, with many graduates roaming the streets of major cities such as Lagos, Kano, Abuja and Port Harcourt in search of elusive white-collar jobs, while for some who were employed, their situation could best be described as under-employment, as they were being underutilised and poorly paid.”“The spate of kidnappings, intermittent vandalism of petroleum pipelines in the Niger Delta, and the protracted insurgency in the North-East are all fuelled, to a large extent, by the high level of endemic poverty in the country.”Dangote noted that the dwindling economic had made things more difficult as the government was finding it increasingly difficult to fulfil its obligations. “Coupled with this, the activities of insurgents in the North-East have also affected the level of poverty in that part of the country.It is estimated that there are over 2.4 million Internally Displaced Persons in the region. It will take billions of naira to rebuild the North-East and fully re-settle the victims of the insurgency.

NEWS : Arresting Jonathan Will Throw Nigeria Into Confusion – Northern CAN...