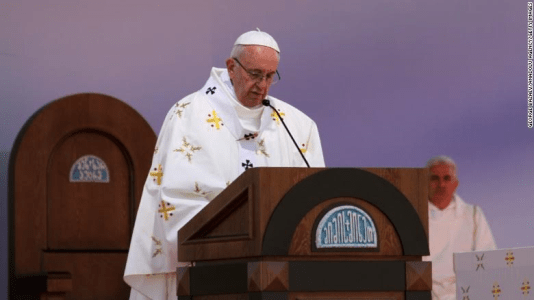 Leader of the Catholic Church, Pope Francis has stated his disagreement with teaching kids in school about transgender issues. According to the
Pope, teaching kids to change their sexual identity is a war against marriage, saying changing a kid’s
mentality on sexual identity in schools is ‘ideological colonization’.
On Sunday, during a return flight to Rome at the end of a three-day trip to Georgia and Azerbaijan, the Pope talked about a meeting with a French
man whose young son wanted to be a girl aftervreading about it in a textbook in school. According to the Pope, he still spends time with Transgender people, trying to lead them closer to God.
”

This is against nature,” he said. “It is one thing when someone has this tendency … and it is another matter to teach this in school. To change the mentality — I call this
ideological colonization. Today, in schools they are teaching this to children — to children! — that everyone can choose their gender,” Pope Francis

Sometime in August, the Pope blasted the teaching of gender identity in schools, calling it ‘terrible’ Francis DeBernardo, executive director of New
Ways Ministry, a Catholic LGBT advocacy group has criticized the Pope, saying people ‘discover their identity’, they don’t ‘choose it’
”

The pontiff’s remarks are further evidence that church officials need desperately to educate themselves about the lives and
experiences of LGBT people,” said Francis Debernardo, executive director of New Ways Ministry. Nobody chooses a gender identity. They discover it.”