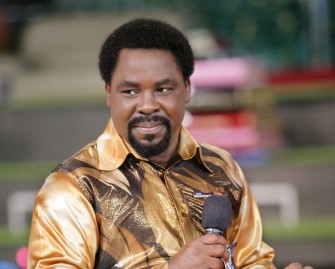 Following the fresh terror attack in France which left over 80 persons dead, a video has surfaced on YouTube about how the founder of the Synagogue Church of All Nations, SCOAN, Prophet T.B. Joshua, claimed he prophesied the terror attack.  Naijagosple recalls that a gunman driving a lorry shot sporadically into a crowd of people in the southern French city of Nice, France during the celebration of the Bastille Day (French Independence day) national holiday on Thursday.  According to the video clip, on July 10, the Prophet reportedly gave a televised prophetic message at the SCOAN, regarding an attack on Thursday, July 14. He said:  “Since morning, God keeps saying we should pray and fast on Thursday to avert any attack in any nation. “On Thursday, this coming Thursday, pray and fast.  “I said which nation? I can’t say which nation the attack they are talking about.  “But every nation just pray on Thursday an attack on any nation should be averted. ”The video, as shared by T.B. Joshua’s broadcasting network, Emmanuel TV, six hours after the attack, claimed the Prophet known for his prophecies, foresaw the attack.